Last night, September 29, I gathered with about fifty Diocese of Atlanta priests and another 70 to 80 witnesses to stand in vigil outside the Georgia Diagnostic and Classification Prison in Jackson, Georgia as Kelly Gissendaner was executed.

You’ve probably heard her story, so I won’t repeat it, but a summary is available here. This is a powerful story of redemption and new life in Christ even behind bars. It is also a disturbing story about the limits of our legal system. Many who support the death penalty in some circumstances had concerns about this case.

As part of his ministry, my bishop tries to attend every execution in the state of Georgia to bear witness to the dignity of every human being, both victims of violent crime and criminals we condemn to death. Several priests in my diocese knew Kelly through their ministry in our prisons. Many of my colleagues worked tirelessly to gather signatures on petitions, seeking to save her life so that she could continue her ministry to others. As it happened, priests of my diocese were meeting for our annual conference retreat this week about an hour away from Jackson with Kelly’s story very much on our minds. When we heard on Monday that the Board of Pardons and Paroles had agreed to hold a special hearing Tuesday morning to let her children speak, we dared to hope that they might grant a stay of execution and commute her sentence to life without parole. When we heard Tuesday afternoon that the stay was denied, we sadly made our way to Jackson.

It feels naive now, but early in the night, I honestly believed she would not be killed – an appeal would be granted, or the drugs would be cloudy again. It was not to be. The drugs were administered at 12:11, and she died at 12:21. They told us she was singing Amazing Grace.

One of our priests, Joseph Shippen, has visited men on death row for many, many years. He has attended these execution vigils all that time. He met us there, wearing a suit and a collar, ready to be our priest.

Around 7 pm, which was the original time set for the execution, he gathered us in a large circle. He explained that over the years a ritual had developed for these events and he invited us to share in it. I may not remember the exact order, but as I recall, we sang four verses of Amazing Grace. He offered a few prayers from the Prayer Book. He invited people who knew Kelly to speak. Some of the “Struggle Sisters” were there, and they talked about how Kelly had helped them when they were with her in prison. We prayed for Kelly, her family, her victim and all who loved him, for the people who were charged with carrying out this work, for those who had the power to grant an appeal or change the outcome. We read the names of every person executed by the State of Georgia in the “modern era” of executions – it was a long list. We prayed for their victims and their families. We recited Psalm 23 and the Lord’s Prayer. And we sang Amazing Grace again. While I was sad to learn that we’ve carried out so many executions in Georgia that a liturgy evolved for them, it was very helpful to have that liturgy, a guide for bringing what was happening before God.

Then we waited. For several hours, I still dared hope that something would happen to intervene. Around 10:30, after the last appeal was denied, it became clear that it would not. One of our priests said, “I feel like we should sing toward the prison, send our faith there.” So a few of us gathered in a corner  by a makeshift fence and sang everything we could think to sing. Lots of Taize chants. Old Baptist hymns. I Want to Walk as a Child of the Light. Nearer My God to Thee. Blessed Assurance. It is Well With My Soul. 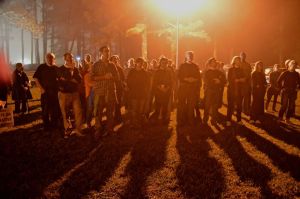 And then we prayed. We prayed the prayers of Compline. Into your hands I commend my Spirit, for you have redeemed me, O God of truth. And Keep watch, dear Lord, with those who work, or watch, or weep this night, and give your angels charge over those who sleep. Several times during the night we prayed the Litany at the Time of Death. Deliver your servant, Kelly, O Sovereign Lord Christ, from all evil, and set her free from every bond; that she may rest with all your saints in the eternal habitations; where with the Father and the Holy Spirit you live and reign, one God, for ever and ever. Amen. And when it was over we prayed again.

And we woke up this morning and kept praying. Lord Jesus Christ, you stretched out your arms of love on the hard wood of the cross so that everyone might come within the reach of your saving embrace.

The brokenness of our world is very real to me right now. Kelly’s death was a tragedy, and  the death of her husband 18 years ago was a tragedy, and there were other tragedies that led to both, and many wounds that resulted. She recognized this brokenness in her last words. “You let my kids know I went out singing Amazing Grace. And tell the Gissendaner family I am so sorry. That amazing man lost his life because of me and if I could take it back, if this would change it, I would have done it a long time ago. But it’s not. And I just hope they find peace. And I hope they find some happiness. God bless you.”

We all live in this brokenness – the pain we inflict, and the pain we absorb. I confessed it twice today at Eucharist. Most merciful God, we confess that we have sinned against you in thought, word, and deed, by what we have done and by what we have left undone.  But by the grace of God, the prayers and hymns of my faith draw me near to God in my brokenness and call me to true hope – not a simple hope that things will turn out the way I want but deep hope that God is working even in our brokenness to redeem.

Kelly learned about that hope from many people, including theologian Jurgen Moltmann. Here is his last letter to her, shared by many on Facebook.

I remain troubled by my state’s actions. Kelly is the fifth person executed since I moved here last year, with many more scheduled. Administering the death penalty costs my state large amounts on money in legal proceedings. It sanctions violence, which we need less of in our world. I deeply sympathize with the pain of families of victims and their desire for some sort of closure, but I don’t think this process produces what they want. A death penalty conviction forces them to relive their tragedies over and over again. I hope we can find another way. (Some thoughts at Georgians for Alternatives to the Death Penalty).