It is difficult to process what we experienced today at Cape Coast Castle, but I will try because we need to be honest about this history.

The castle was built in 1665 purposely to hold enslaved human beings. Elmina Castle, built by the Portuguese in Cape Coast in 1482, had been built to warehouse gold and ivory. As the slave trade developed, Elmina was adapted to warehouse enslaved people. This Castle was built to hold people from the start.

An African person would be captured by a slave trader, given a last bath at a site we’ll visit later this week, and then brought to this room for auction. From there, he or she would be branded, and then sent to the dungeons.

There were five chambers in the male dungeon. Each chamber had only two or three small windows for light and air. 150 to 200 men were kept in each chamber. Those thought to be most violent were locked behind a door in the first chamber. The final chamber had a larger window to allow more light in order to see if someone had gotten sick. Those too sick to be put on a ship were thrown to sea.

There were two separate dungeons for women, which housed around 150 each. These dungeons had larger windows so that British soldiers could see and choose women to assault and rape. Those who resisted were kept in a dark cell.

Enslaved people were held at the Castle at least two weeks, but sometimes for months, while waiting for the ships to arrive. When the ships were ready, the men were walked through a tunnel beneath this walkway to the Door of No Return. Women were taken directly outside their dungeons. 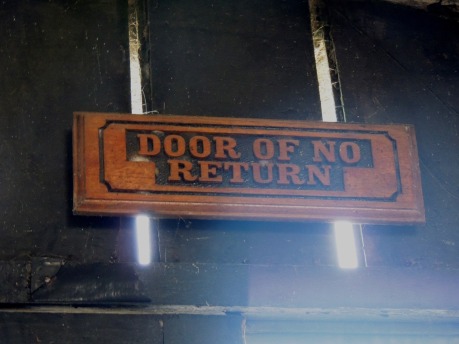 And while all of this was happening downstairs, soldiers and officers lived upstairs. They even worshiped in an Anglican chapel above the male dungeons.

As I considered how horribly enslaved Africans suffered in this place, I also thought of Native American people who were torn from their homes forced onto reservations. And victims of lynching in the US. And Jewish people who were sent to concentration camps. And migrant people around the world who are not welcome in any country. And immigrant families fearing detention today.

The common denominator is a frightening ability of one group of people to look at another group of people and decide they are less than human and therefore less deserving of care. If we see anyone as anything less than a beloved child of God, we run the risk repeating the horrors of the past.

As I tried to make sense of our visit to the Castle, I kept returning to how the day began. We began at Bishop’s Court, sharing Eucharist in the chapel there with Bishop Atta-Baffoe and his staff. Beautiful prayer and beautiful singing.

As a special treat, the man who makes the wafers used in all the churches for communion was there to show us the technique.

When we break the bread in Eucharist, we are breaking Christ’s body. We look again at the brokenness and suffering in our world, past and current, in which Christ is present. Jesus came among us not as one of the people upstairs at the Castle but as one down below. Visiting the Castle today, like visiting Dachau or the Holocaust Museum or the Legacy Museum, makes us want to redouble our efforts to ensure such horrors are not repeated. Looking at the broken body of Christ should do the same.

At Eucharist this morning, Bishop Victor gave us a copy of the vision, mission statement, and core values of the Anglican Diocese of Cape Coast. The first core value: We affirm the dignity of all people as Children of God. One purpose of our partnership is to live out this value together, and repent of ways we have violated this value in the past. This is worldwide work. I’m grateful for our partners in mission.