So what else happened? 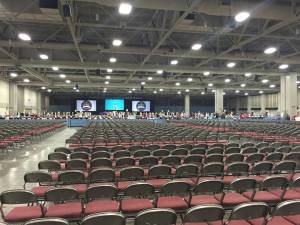 It may be the height of church nerdiness to keep talking about General Convention after it is over, but here goes.

While there, I wrote about our new Presiding Bishop, the conversations about alcohol use, new evangelism and church planting initiatives, communion without baptism (and the decision not to study it), racial reconciliation, the budget,  and the same-sex marriage decisions. But there was more.

Over dinner last night, Deputy Burton-Edwards (from Indianapolis) and I named our top five other decisions from GC 78.

1) Liturgy – The big news here is that Convention asked the Standing Commission on Liturgy and Music to develop a plan for a comprehensive revision of the Book of Common Prayer (A169) and Hymnal 1982 (D060). This is just the beginning of a long process that is sorely needed. In addition, Holy Women, Holy Men will become A Great Cloud of Witnesses (A056).  This Convention also authorized additional materials for Honoring God in Creation (A058).  C015, asking that a question about protecting the beauty and integrity of creation be added to the Baptismal Covenant, was referred to a committee for further review. The church owes Ruth Meyers, chair of SCLM, a huge debt of thanks for the work she has already led.

2) Structure – As in 2012, many, many proposals for restructuring our life together came before this Convention. The biggest change that emerged is a reduction in the number of Standing Commissions down to two (A006). We will continue to have a Standing Commission on Liturgy and Music (which is helpful since they are taking on even more work in the coming triennium). We will also have a Standing Commission on the Structure, Governance, and Polity of the Church (A097). Executive Council and General Convention are authorized to appoint additional task forces or committees as needed.  A move to a unicameral General Convention was discussed and rejected in favor of a hybrid approach – a change in the constitution to allow Deputies and Bishops to “sit, debate, and vote” separately or together (D008).  I think this is a good step – preserves the integrity of both houses while allowing the two groups to work more closely together when that makes sense.  General Seminary alums may also be interested to know that D075 – Reinvigorate Accountability of GTS to General Convention – also passed.

3) Title IV – This might not get much discussion in the news, but Convention did spend a lot of time on this, so it is worth mention. The Title IV Canons are the disciplinary canons – how the church responds in cases of clergy misconduct. These were heavily revised in 2009 and we have been using this process for several years (the link has a nice summary – not an endorsement). I believe 23 of 27 resolutions submitted to GC 2015 suggesting changes to Title IV were approved. Many clarified small details of the process (timelines, compensation, etc.). A list of Title IV resolutions that were considered is here. Though this process probably feels punitive when it is underway, the goal is reconciliation and healing, so this is important work.

4) Digital Formation and Evangelism – Though we eliminated the Standing Commission on Communication and Information Technology (A010), several resolutions supported use of digital media. Convention approved a $750,000 Digital Evangelism initiative (B009) proposed by Bishop Benhase of Georgia ($3 million had been requested). Another resolution proposed to Develop an Awareness of Online Christian Formation Resources (A075).

5) Fossil Fuels – Several resolutions dealing with the church’s financial investment in fossil fuels were discussed. In the end, C045. Resolved, That the 78th General Convention calls upon the Investment Committee of the Executive Council, the Episcopal Church Endowment Fund, and the Episcopal Church Foundation to divest from fossil fuel companies and reinvest in clean renewable energy in a fiscally responsible manner. It did not seek to define “fiscally responsible manner” so we’ll see how this gets interpreted in the coming months. This resolution also called on dioceses and parishes to engage the topic of divestment in the coming year.

Photo of an empty House of Deputies by Bruce Gray